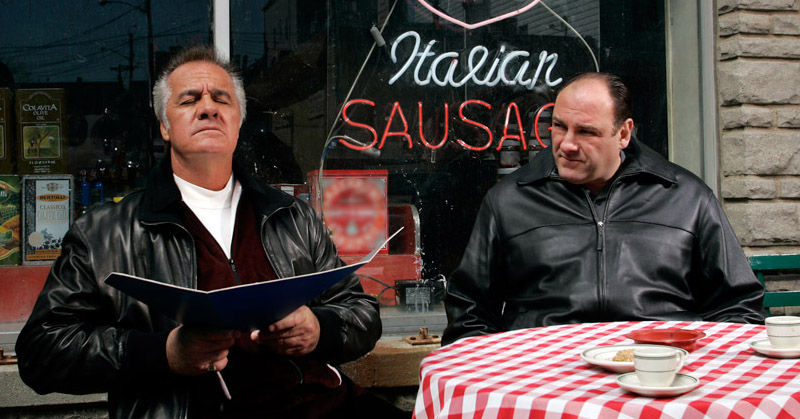 Sure, we know about inevitable yet surprising, about providing an audience with a sense of satisfaction, loose ends tied up, but what about all those great unresolved endings? Audiences get great pleasure from pontificating on what they think happens after the credits roll, or more emotionally, what they desperately hope happens. With that said, all I can offer is my take on a much-discussed ending (sorry, did I say “much-discussed” I meant, “finest of all time”) of the David Chase/HBO masterpiece, The Sopranos.

Is Tony Soprano assassinated in the final scene of The Sopranos, or isn’t he? This seems to be the driving force behind the argument that the ending of The Sopranos is weak, yet I fail to see how it matters. We didn’t see his birth, why should we see his death? We were treated to a small slice of Tony’s life. We joined him one morning as he wandered into his pool to feed the ducks, and we left him one evening as he sat in a restaurant. The complaint there wasn’t anything after the screen cut to black suggests we haven’t learnt enough, or we haven’t been given a sufficient amount of
information about the life Tony leads up to that point. Ridiculous. Which causes me to ask, what then should we have seen instead? Given Tony has never changed, nor will he.

“Well, you woke up this morning, get yourself a gun”

He loses his freedom? We’ve already seen that story through Johnny Sack. Does he lose his mind? Uncle Junior covered that. He loses his family, left with no one to love him? That has been the story of Paulie Walnuts since day one. He loses... his life? We have done that. A lot.

Even for our main character, the finality of death is not climactic enough, given the unsurpassable emotions raised by multiple previous deaths throughout the series. You are not going to top Adriana’s drive to the airport, so do something different. I won’t force my opinion of “it’s a good ending” upon you (maybe), but I have to stand firm on “the alternative would have been bad”.

... is a line spoken by Bobby Baccalieri in S6E13 - Sopranos Home Movies, in referring to one’s death, and was a way of proving Tony is in fact killed in the final episode as for Tony, everything just goes black. But here’s the thing; it is a misquote, it was never said, it was added to the internet after the fact in a desperate attempt to bring closure to those who needed it. Those who could not bear the fact they would never know had to come up with some tiny fragment of a hill to die on. This is how
we get into the argument of good or bad but, is it merely a debate between people who get satisfaction from knowing and those who get satisfaction from hypothesising?

Besides, Bobby’s actual line is “...you probably don’t even hear it when it happens, right?” Yet, the bell above the door to the restaurant rings, alerting Tony, so according to internet retcon logic, it cannot be Tony’s time.

In S1E05 - College, Meadow gets drunk, ultimately leading to a postponement of a hit on Tony. In S3E05 - Another Toothpick, it is Meadow who, unbeknownst to her and Tony, removes the FBI’s bug from Tony’s house. And in S6E03 - Mayhem, a comatose Tony is literally stepping into oblivion before a voice calls him back, Meadow’s voice. Meadow, Tony’s hidden protector, his Guardian Angel, is late to the restaurant. Is this confirmation of his death? No, clearly not, it is one of the hundreds of theories based on action, dialogue, foreshadowing, assumption, or plain invention.

Of these hundreds, pick any, it doesn’t matter because we know his fate, beyond the black screen he will repeat the same patterns over and over until the day of his death, whenever that is.

Back to where we started

We opened with intrigue and questions unanswered, and we close with just the same. That’s Tony Soprano. He’s given us a lot. Sometimes he’s shared too much and disappointed us, sometimes he’s held back and frustrated us but whichever side of the inane ‘good or bad’ debate you fall on, there are things you will NEVER know about him and you’re going to have to deal with it, because... all due respect, you got no fucking idea what it’s like to be number one.